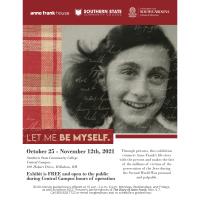 A national exhibit surrounding the life of Anne Frank will be open to the public at Southern State Community College’s Hillsboro campus this October, followed by a production of “Diary of Anne Frank” at the beginning of November.

“Let Me Be Myself” is the title of the exhibit, which includes 30 three-by-six-foot panels displaying text and images related to Frank’s life, according to Southern State Theatre Department Director Rainee Angles. Angles said some of the panels depict contemporary youths discussing prejudice and other topics that affected the Frank family in the mid-1900s, connecting Frank’s life to the youth of today.

The exhibit, belonging to the University of South Carolina, opens Monday, October 25 and closes Friday, November 12. A group of 20 SSCC students and faculty will serve as tour guides, and tour schedules are forthcoming. Observers can also guide themselves through the exhibit as they please. To schedule a guided group tour, call Angles at 937-393-3431 extension 2794.

Meanwhile, the theatre department’s production of “Diary of Anne Frank” will be performed November 5 and 6 at 7:30 p.m. and November 7 at 3:30 p.m.

Angles said her concept for the play is the power of words, highlighting not only the powerful and hopeful ideas in Frank’s diary, but also the negative impacts of harmful rhetoric.

“I’m teaching that it’s important that our students think about the power of words — how they can have a positive or negative impact,” said Angles. “It’s not just the spoken words that we experience face-to-face or in broadcasts, but also what we read in print and on social media. Whether political or personal rhetoric … words have the power to influence others. As professed by the United States Holocaust Memorial Museum, ‘The Holocaust did not begin with killing; it began with words’.”

Angles said the play covers two years in a couple hours: from the day, the Frank family arrives at The Annex, their place of hiding, until they are found and arrested.

Angles said working on the play has already been a powerful and emotional experience for the cast and crew.

“Not only is it an educational historical piece, but also a piece that evokes empathy for everyone involved,” Angles said, “The artists and the audience.”

Pre-sale tickets for the theatre production will be available online beginning Oct. 5. Visit http://sscctheatre.com/tickets/ to purchase tickets or contact Angles by calling 800.628.7722, Ext. 2794. 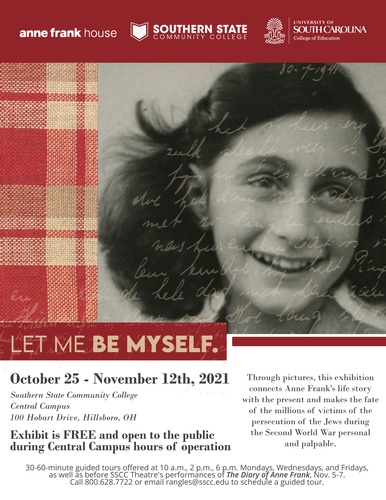